This past summer, the Environmental Protection Agency took the greatest single step the U.S. has ever taken to address climate change, finalizing the Clean Power Plan. The Clean Power Plan sets the first-ever federal limits on carbon pollution from power plants, reducing it, by the year 2030, 32 percent below 2005 levels. This will only further encourage the transformation already underway in the power sector and spur development of cleaner, safer sources of energy. That’s good news for western Colorado.

The Clean Power Plan provides states flexibility to create customized plans to reduce carbon pollution and modernize energy portfolios. That will further encourage innovation in the power sector, creating jobs and leading to lower utility bills for consumers in the long run, according to the analysis that accompanied the rule-making. And this revolutionary shift that is occurring now is one upon which Colorado is uniquely poised to capitalize.

As is the case with all transformational change, there’s a status quo that would benefit from keeping things exactly as they are. The Clean Power Plan triggered a rush of lawsuits aimed at the new standards. Unfortunately, Colorado Attorney General Cynthia Coffman joined in this lawsuit even as Gov. John Hickenlooper remained steadfast in his readiness to make the Clean Power Plan work for Colorado.

Climate change has profound impacts on growing seasons and crop yields, but local solutions have promise.

This story was produced in partnership with KVNF Radio in Paonia, Colorado.

According to the National Oceanic and Atmospheric Administration, this year is on course to be the hottest year in recorded history. And with greenhouse gas emissions increasing, we’re closing in on a global temperature rise of more than two degrees Celsius — what many scientists agree is a point of no return in avoiding the most dangerous impacts of climate change.

Those impacts are felt more acutely in the West.  Because it’s mostly arid, mountainous, and largely rural, the West sits in the crosshairs of the most profound impacts from climate change.  Substantial changes have already affected growing cycles and yields for agriculture, a huge part of the Western economy and culture. Many small communities are rising up to address the challenge of food security. During a panel discussion on climate change impacts to agriculture in Paonia, Colorado, one expert talked about the drastic change he’s personally studied in these mountains.

Pete Kolbenschlag, the organizer of the Paonia panel discussion, knows that food security affects everyone. “If you care about what’s on your plate, and you care about feeding other people and the planet, then we need to care about climate change, because climate change is going to affect our food supply,” he says.

Because coal is big in Western Colorado — as an abundant resource, a cheap way to generate electricity and a provider of good-paying jobs — President Obama’s initiative to reduce carbon emissions from power plants has more opposition here than other parts of the state.

The fact that Colorado has a voter-approved Renewable Portfolio Standard is proof that clean energy is important to Coloradans. In many ways, the coal industry has enjoyed the largesse of government policies favoring cheap electricity because it hasn’t been on the hook for spillover costs.

Not anymore. Any way you slice it, the Environmental Protection Agency’s Clean Power Plan seeks to reduce the amount of coal America burns to meet energy demands. Coal and its big carbon footprint are at odds with the climate objectives of the Obama administration.

The good news is that Colorado is well positioned to meet the goals of the Clean Power Plan, and even profit from new technologies, as several environmental organizations told The Sentinel’s editorial board last week.

And the plan simply seizes on a direction America is headed anyway. Coal has been in a steady decline, in part because of a natural gas boom, but also because consumers like green energy. The low costs of coal-fired electrical generation don’t reflect other costs, like treating respiratory diseases from pollutants. Things important to the Western Slope, like agriculture, wildlife, orchards, vineyards, snowpack and runoff all stand to be impacted by climate change.

So, there are important reasons to support the plan. But we’re bothered that a shift in government policy can be so devestating to communities that have built their economies around coal mining and coal-fired plants.

The federal government is responsive to natural disasters. Shouldn’t it be just as responsive to economic disasters of its own making? The EPA plan will impact places like Moffat and Delta counties. How about the equivalent of FEMA money going to these places to diversify the economy? And any large-scale renewable projects like solar arrays should go there too.

The Delta Board of County Commissioners has taken an official position on the proposed Thompson Divide gas lease exchange which includes federal gas lease properties in Delta County.

County administrator Robbie LeValley notes the exchange process is likely to be a long one involving levels of government right up to the U.S Congress which will have final say on the exchange and its terms.

“In the support letter, Delta County reiterated that the proposed legislative exchange provided an opportunity for a larger landscape conversation regarding fluid mineral leasing in the North Fork Valley. Delta County has worked collaboratively with stakeholders in the last two months to reach a point of consensus specific to the mineral management in the North Fork Valley that includes a fluid mineral withdrawal and other legislated stipulations. The point of consensus is for oil and gas only and does not impact coal or the ability to capture and market methane. Development on the exchange leases should be allowed to progress under the lease requirements as administered within federal, state and local regulations. The protections of water resources, air quality, visual resources and related traffic issues must and would be addressed by thorough site-specific reviews and resulting conditions of approvals.

“The letter and proposal are the first steps in a lengthy process and Delta County will be at the table during the drafting, editing, amending and final process. Delta County looks forward to working with all stakeholders during the legislative and regulatory process and will continue to push for the locally developed agreement as part of any legislative package.”

Read the full article in the Delta County Independent  here

This past May the Colorado Farm & Food Alliance joined with partners and friends including Slow Food Western Slope, the Rocky Mountain Farmers Union, and the Valley Organic Growers Association to bring a sampling of top quality Colorado-sourced food and drink to Denver, with a message.

If you care about food you need to care about how oil and gas is getting developed in Colorado.

“It’s very important that oil and gas development happen responsibly,” said Jim Brett of Slow Food Western Slope. “It doesn’t need to happen everywhere, we must be careful about our food sources.”

END_OF_DOCUMENT_TOKEN_TO_BE_REPLACED

Hey, Colorado – how about a climate challenge?

FRISCO — Everybody is talking about climate change, but that palaver doesn’t always translate into action. Not so in Paonia, though, where community and climate activists will gather May 1-3 for the Western Colorado Climate Challenge & Solar Fair.

The three-day event features exhibits, presentations, and hands-on breakout sessions aimed at resolving Colorado’s climate crisis. Click this link for the full schedule. The Climate Colorado event site is here and you can also stay in touch with the event on Facebook.

The weekend opens with the Solar Fair at Solar Energy International and closes with a special Sunday matinee showing of the acclaimed documentary Merchants of Doubt, which exposes the climate denial movement as being funded by anti-environmental corporate interests.

ColoradoPols » Step Right Up and WIN! This Boom will never Bust, Baby!

Step Right Up and WIN! This Boom will never Bust, Baby! 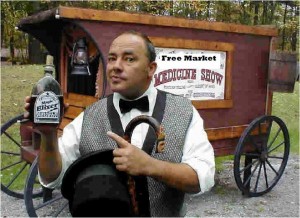 Colorado is about to lose thousands of jobs, again, as the latest boom and its promise of vast riches crashes into the reality of a volatile commodity market.  Again.

Like in the last bust in 2008 that hit the western Colorado gas fields, it was just months prior that the boosters, peddlers, hucksters and snakes, oil-salespeople were all saying this time would be different, this time we would ride the mineral riches to everlasting everything.

Until we’re not.  Until the prices, in the most volatile of animal spirited commodities—fossil fuels, drop. Again.  And then Colorado is left holding the bag.  Again.

The Paonia Fashion Show is back! This time the Elements are rising to the occasion. More than just a fashion show, this year The Unicorn Arts Collective is bringing a multi-media arts experience to the Paradise Theater.

Originally conceived as The District 81428 Fashion Show, created by Regna Jones, it was a staple of the community for many years. When the Paradise was sold the fashion show lay dormant and was greatly missed. In 2014 the Unicorn Arts Collective was co-founded by Chelsea Bookout and Sharon Bailey to resurrect and recreate the production. Working tirelessly, the members of the Collective have been hand crafting the endeavor of reviving a beloved community experience. “I am constantly blown away by the level of talent in the valley and the beautiful collaboration happening with this years’ show.

Spring is approaching and it’s time to start plotting your garden. First, what are you hoping to grow? A specific variety of squash or particular heirloom okra? Whatever it may be, the Hotchkiss Seed Library probably has it! They have a vast array of seeds to peruse that any library member can check out.

Read all abut the Hotchkiss See Library at http://www.northforkscrapbook.org/the-scrapbook/the-north-fork-seed-library